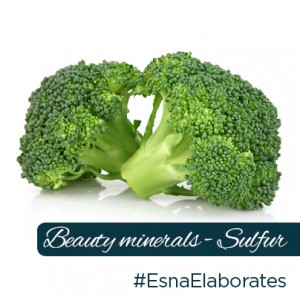 Beauty depends on mineralisation.   Minerals in its digestive form are required for rejuvenation and beauty. If minerals come through to us in eating plants, then the body can digest the minerals and utilise them immediately. Better to get your minerals from plants and not through the digestion of colloidal minerals in liquid form, which can create trace mineral overdoses.

Becoming more deeply mineralised is a step by step process. It involves moving to organic foods and beyond. It involves saturating one’s tissues with the following beauty minerals:

Sulfur is one of the least discussed minerals, yet the most important. Sulfur and oxygen are considered to be closely related.

What Sulfur does in the body:

Sulfur is considered the foundational mineral of all beauty. Sulfur residue foods make the complexion radiant. Sulfur is an essential component of all connective tissue. Sulfur provides elasticity, movement, healing and repair within tissues. MSM is an organic form of Sulfur that appears in all living organisms.

Adequate sulphur levels are maintained by including MSM and sulphur-residue foods regularly in ones diet. Sulfur-residue foods are recognised by their characteristic spicy effect evident in garlic, onions, mustard and horseradish etc. Sulfur compounds are spicy and they tend to cleanse our tissues in a way that they feel “oxygenated”.

Appreciation On this beautiful autumn Saturday morning in South Africa, 28 May 2022 my heart …